About the Comic | About the Author | World Info

Concession first went online at July 3rd, 2006 on its orignal host, Comic Genesis. Around November 8th, 2007, it moved to its own server space where it now resides. It began as a once weekly comic, soon started with second black-and-white updates, and now goes twice a week in full color.

The comic's initial scope was a "gag-a-day" format, with only the minimal semblances of plot, but it wasn't long until full story arcs took place. Concession is not presented in a graphic-novel format, but the arcs are split into titled chapters, as can be seen in the archives page.

Concession has two spin-offs: At the Heart of it All, which is a personal, introspective comic by the author, and Concession Chronicles, a somewhat neglected blog featuring first-person stories written by Concession characters.

Previously, there was a translation project to get Concession into as many languages as possible. The project is gone for now, but Immy plans to re-start it some day.

Since Christmas, 2007, Concession has been tablet-drawn. Before then, the comics were inked on paper, scanned, and digitally colored with a mouse. 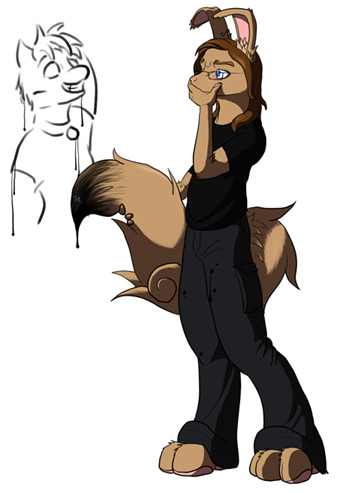 Immelmann is from Massachusetts, and he is the author of Concession, responsible for the writing, illustration, and web design. He is currently in his last semester as an art major (hopefully), working toward a degree he plans to never use.

He originally started Concession as a way to vent frustration about customers, as he worked at a movie theatre at the time. Roland's inclusion in the comic was a way to vent the ideas that came to him during college - Roland briefly had a job as a gallery monitor in his school, as did Immelmann.

The minimal spare time allowed by his comic and school life allows him hobbies centered in video game and music. He listens to a lot of metal and plans to record music of his own some day.

His friend's nickname for him, "Immelmann", is taken from the anime Last Exile.

Find Immelmann on...
Fur Affinity
SoFurry
InkBunny
DeviantArt
Twitter
And you can email him at: immelmann42@gmail.com

Furry Society and a Brief History

The world of Concession has maintained a history and geography rather similar to the real world. Countries and government laws are more-or-less the same.

Furry/human relations are not entirely smooth, however. In the United States in particular, furries were kept oppressed by laws for much of history, and only within the last ten years were allowed full rights equal to humans. One of the last major laws to be upturned was one forbidding interspecies breeding between different breeds of furry and between furries and human. Even now, cross-breeds in America are rare, although in other countries, particularly Europe and Africa, they are much more commonplace.

The furries in Concession are somewhere between "animal-human hybrids" and "fully evolved animals". Many furry species possess traits not found in humans - retractable claws, fins on dolphins, etc. - but, at the same time, all are very closely based on humans in anatomy. All furry mammals have the same genetic foundation as humans and the same number of chromosomes, and follow a human-like menstruation cycle, forgoing the feral concept of "heat".

The primary exception are the lizard and dinosaur race, the latter of which are thought to be the further evolution from birds, which, in turn, evolved from dinosaurs (thus, there are no bird furries in Concession). True to their avian counterparts, the dinosaurs in Concession are egg-laying, cloacal creatures, and similar can be said for Concession's amphibians and true lizards.

Fossilized remains of ancient dinosaurs show that they had much more of a feathery covering than they do today. In the modern world, dinosaur children are born with feathers on their heads, arms, legs, and tails. The males lose all feathers at puberty, the females keep their head feathers. Rare cases of adult males with feathers, and adult dinosaurs with arm and tail feathers, have been reported and documented as a genetic defect. 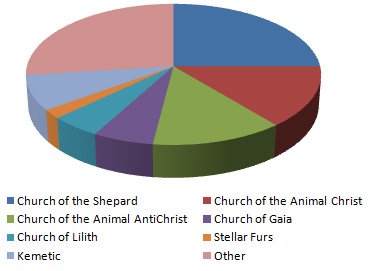 Although all real religions still exist in Concession and operate in the same frequency and method, a number of new religions are directly connected to the presence of furries.

The Church of the Shepherd is a Protestant-based branch of Christianity. It keeps its religious text as exclusively the Christian bible, which they interpret in such a way to encompass and embrace furries. This is the most common religion among furries; about 25% of all furries are members.

The Church of the Animal Christ has its own religious text, which tells of Jesus being reincarnated as a furry. Most versions tell of him being born in the body of a dinosaur, although fringe groups exist speaking differently. This is the primary religion of most of the dinosaurs in the world, although it only represents 14% of all furries worldwide.

The Church of the Animal Anti-Christ are a rather militaristic religion, insisting that furries as a race represent the biblical Anti-Christ and are destined to take over the earth. Despite their history of terrorists attacks (primarily by groups overseas), they maintain 11% of the furry population and, as a group, can be thanked for much of the civil rights now allowed to furries.

The Church of Lilith gets its origin and inspiration from the apocryphal story of Lilith, first wife of Adam, who was cast out of the Garden of Eden. According to their text, she bred with the demons and beasts of the world, and thus bore the origin of the entire furry race. It is often compared to the Church of the Anti-Christ and is seen by some as an "ally" to the religion, with a growing number of groups combining the two texts.

The most common non-Christian furry religion is the new Kemetic Church, which has basis in Egyptian mythology. The members of this faith believe that the Egyptian gods existed and still have influence today, although the religion has become rather modernized and contemporary.

The Church of Gaia, known derogatorily as the Church of Bestiality, is a religion similar to Wiccan, stressing the importance of the furry (and human) state of being mere animals and the spiritual connection to earth and its spirit, known as Gaia. Although a strictly nonviolent religion, it is very infamous and controversial for its support for bestiality and polyamoury.

The Stellar Furs is a religion and organization claiming that furries, or at least their evolutionary origin, originally came from space as aliens, presumably from a much more advanced society. Though the religion did not exist until soon after the birth of the internet, part of its claimed evidence is based on ancient cave drawings and inscriptions, Mayan designs being their most famous and important inspiration. It is considered by many to be a joke and a cult, but is just popular enough to be considered a proper, legal religion.

Other, harder-to-trace religions exist. In particular, one that seems exclusive to dolphin populations is a modernized form of animsim, similar in theory to The Church of Gaia but entirely unrelated and with a different set of rules.

Closely linked to the power of The Church of the Animal Christ is the Jansen Estate, a historically important backbone to dinosaur organizations worldwide. It was considered a small empire some time ago, with its center based in Africa, where it still holds strong influence today. The American branch has held strong influence in history, although in recent years its power faded. In 2007, much controversy surrounding the family's new matriarch set a fracture down the center of the family.

Other strong species-based families exist as well, including the International Communist Platypus Organization, which... mostly speaks for itself. They practice a tightly organized pattern of arranged marriages and selective breeding, aiming to expand and empower the platypus species.

The most important American company in Concession is the Calley Corporation, which was founded by Isaac Calley after the merging of a number of small chemical and pharmaceutical companies. Isaac expanded his reach toward other fields, including the ownership of a few Hollywood companies and a national chain of movie theaters. The company is now owned by Julian Calley, whose first action of major investment in electronics helped the company grow like never before.