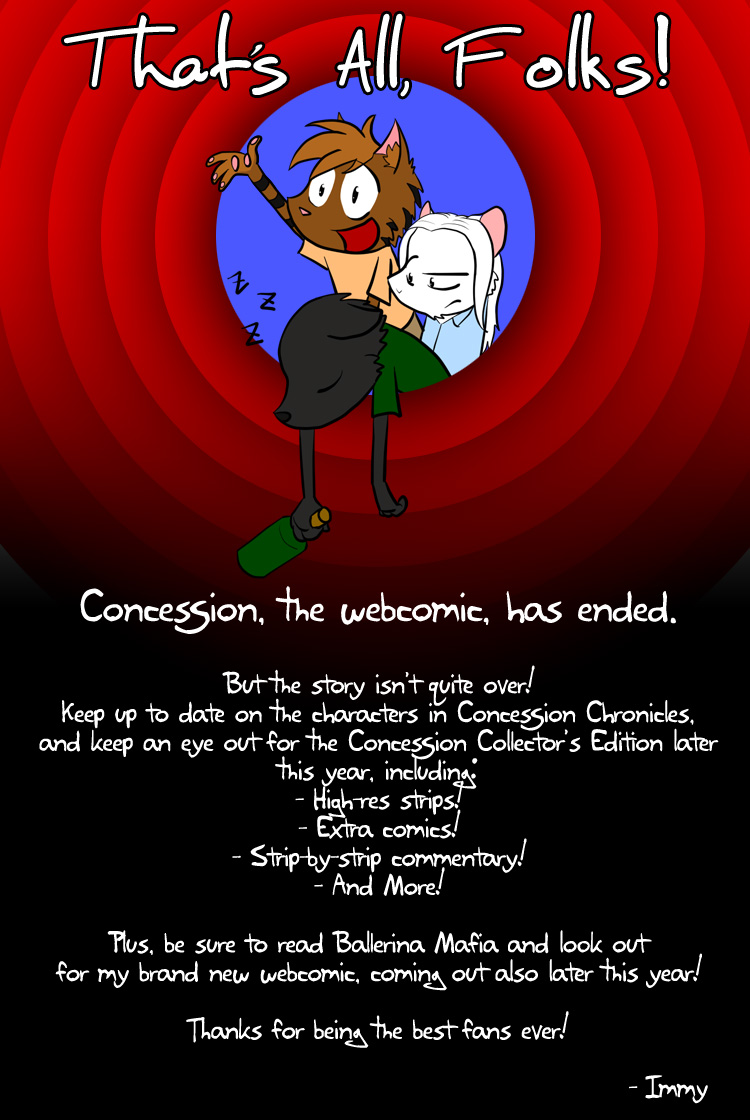 And so with this sappy, fan-servicey lovefest, I now officially declare the Concession webcomic to be finished.

I started this comic when I was 18. I was a Freshman in college for graphic design. I didn't know what a tablet was. I had only recently discovered webcomics. I still worked in a movie theater. Portal had not yet been released. I had hopes for my fledgling comic, at first hosted on the free host Comic Genesis, but I knew to just aim small first - told my friends about it, kept my humor simple. Concession would become essentially the defining aspect of my life as an artist to anyone who actually got to know me. I did my best to make it funny, sad, and sexy, and I did my best to make a compelling story with interesting characters. Sometimes I didn't do so well, and sometimes things didn't make sense. Still, I think I'm very proud of what I've done.

At this point in time, I mark Concession as the greatest thing I've done so far. I pride the fanbase and creation I have made more than I do my college degree. The comic brought me friends, lovers, money, and adventures. It forced me to become leagues better in art than I ever was before. To close this chapter of my life is a hard thing to do, but it is a necessary move.

Of course, this is not the full end of Concession. Soon I'll be reactivating Concession Chronicles and, in time, you will see new fiction there, new stories with our beloved Concession crew. Furthermore, I already plan to have some Concession characters star in comics in my new webcomic, Ballerina Mafia. If you keep an eye on my Fur Affinity, you'll see art of Concession characters from time to time. And of course, the high-resolution Collector's Edition of Concession, with added content, will hopefully be available sometime later this year (more on that later).

I love my fans. You all mean a lot to me. Thank you for joining me in this exciting artistic and comedic adventure. Keep an eye out for my new projects, as I think some of you will enjoy them.

Thank you so very much, everyone.